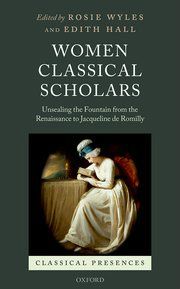 After graduating from Oxford, Betty Radice taught, studied and translated Classics while bringing up her family.   She was already 47 when she joined Penguin Books as deputy to E.V. Rieu; on his retirement she became joint editor of Penguin Classics, seeing over a hundred editions through the press.   For more than thirty years she was involved with the “Penguinification” of Classics, one of the most influential, and controversial, forces in the anglophone reception of Greek and Latin.

My essay celebrates Radice as editor, writer and scholar, tracing patterns now familiar in the stories of women classicists: self-taught Greek, an untraditional career pattern, an oblique relationship to the pains and privileges of classical learning.   At Penguin she worked with the leading classicists of her time, balancing the imperatives of publishers, the needs of students and the broader reading public, and the demands of scholars and critics.

Radice argued for the place of scholarship and verse translation in “popular” editions.  She articulated an overall vision of Penguin Classics as scholarly without being pedantic and contemporary without being ephemeral—qualities exemplified by her own translations of later Latin authors.   Her witty and readable Who’s Who in the Ancient World: A Handbook to the Survivors of the Greek and Roman Classics paved the way for the study of Classical reception not only in literature but in art, music and film.

Radice’s unpublished papers, together with her Penguin and Bodoni editions, portray a woman whose life in Classics made a unique contribution to its survival.  All, as she herself wrote, for “a paper-covered book under the emblem of some bird from the snowy wastes of the antipodes, not even the owl of Minerva”.