On this page are abstracts of papers on “Joyce's Greek” and “Greek in Joyce/ Joyce in Greek” and the full text in Greek of my article (co-authored with Aristea Komninelli) on Kapsaskis’ translation of Joyce’s Ulysses. 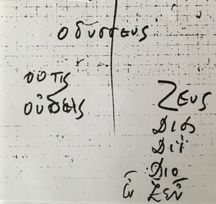 An entry in one of Joyce’s Greek notebooks

Untranslated Greek may be embedded within the Modernist text as a nugget that refracts or resists meaning; or, it may work free of its surroundings, highlighting the presence of an author and demanding hermeneutic enterprise from the reader.   The Greek alphabet and the cultural prestige of the language and its literature simultaneously promise and withhold access.   The attempt at translation and the counter-claim of “untranslatability” become literary topoi, elements in the Modernist apprehension of the autonomy and elusiveness of language.

The paper takes as its starting-point instances of untranslated Greek in Eliot, Pound and Woolf before turning to the rather different case of Joyce.   I suggest that Joyce’s distinctive use of Greek may unsettle our accounts of classical and modern foreign languages within Modernism.   My discussion is in three sections.

1.  The evolution of Joyce’s Greek.

Joyce was never formally educated in Ancient Greek and first learned the language as spoken and written by Greeks of the diaspora.   He then became interested in the liturgical Greek of the Orthodox Church before starting on a more systematic study of the ancient language.   This encounter, in reverse order, with the whole diachronic development of Greek finds its parallel in the linguistic recapitulations of Ulysses.

The acute diglossia of early twentieth-century Greek chimes both with Joyce’s experience of the English language in Ireland and with the polarisation of his untranslated Greek into learned non-sense (gnomon, parallax, metempsychosis) and childishly playful onomatopoeia and obscenity (in Modern Greek words for bodily parts and functions).

Joyce almost always transliterates Greek into the Roman alphabet, rendering it as sounds and lexemes and thereby foregrounding its materiality (rather than its “classical” associations).   Because many Modern Greek words are calques on other languages (e.g. siderodromos < G. Eisenbahn, Fr. chemin-de-fer) Joyce’s Greek naturally dismantles and re-assembles itself.   His “Helleniky” has a special resonance among the 87 “polyfizzyboisterous” languages of Finnegans Wake where the sea (Hellas, alas, tha lass, thalassa) is the ultimate source and destination.

Paper read at the conference Modernism and Non-Translation, Durham, July 2013.

Greek in Joyce / Joyce in Greek

Joyce was never formally educated in Classical Greek.   Self-exiled to Trieste, he heard the modern language spoken by diaspora Greeks and re-imagined figures from antiquity as today’s sailors, clerks or merchants.   While writing Ulysses he began a more systematic study of Modern Greek.   By 1929 the first Greek translation of Joyce into Greek had appeared, and a two-way process of translation and influence was under way.

My paper begins with an examination of Joyce’s notebooks to reconstruct the way he learnt Modern Greek; I argue that his experience of the contemporary language shaped his use of classical analogues in Ulysses.   I also show how Greek found its way into the linguistic structures and polyglot wordplay of Finnegans Wake, where “Helleniky” has a special resonance among the Wake’s 87 “polyfizzyboisterous” languages.

I then discuss Modern Greek versions of Joyce as a special case within the study of translation and reception.   What happens when an Irish Modernist confrontation with Classical Greek prototypes is translated back (or forward?) into Modern Greek?   As Ulysses  has returned to Greece latent meanings have emerged from the antetext, while Greek readers and writers have discovered new resources within their own language.   Dublin has been re-written as Athens and a new version of Greek, αγρυπνοελληνικά [Wakish], is being forged for Finnegan.

Joyce’s translation into Greek has always been bound up with his reception by Greek writers.   I conclude by outlining the story of Joyce’s influence—what does it mean for a Greek text to be Τζοϋζιανός?   Borrowing the “migratory” or “diasporic” model of translation and reception proposed by Lorna Hardwick, I trace the presence of Joyce in four Greek texts: Angelos Terzakis’  Η μενεξεδένια πολιτεία,  George Theotokas’ Αργώ,  George Ioannou’s  «Ο θείος Βαγγέλης» and Kosmas Politis’ Eroica.

Paper read at the KCL Modern Greek seminar, February 2012 and (adapted) at the conference Greece in Translation, Oxford, October 2012.

“Winning the Game of Words”

An account of Sokrates Kapsaskis’ translation of Ulysses into Modern Greek, by Aristea Komninelli and Rowena Fowler.  Click on the pages to download full size copies. 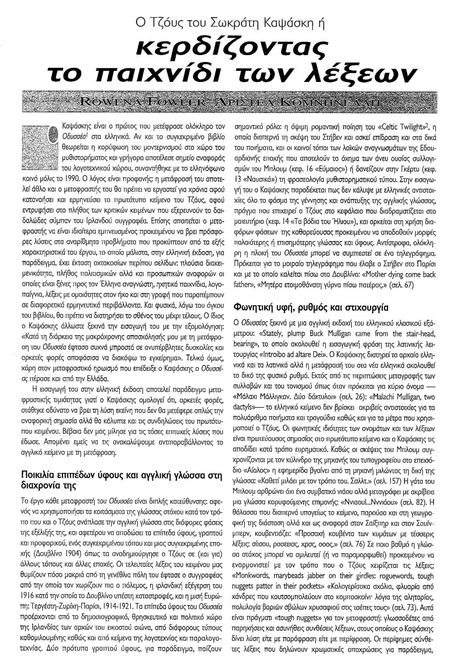 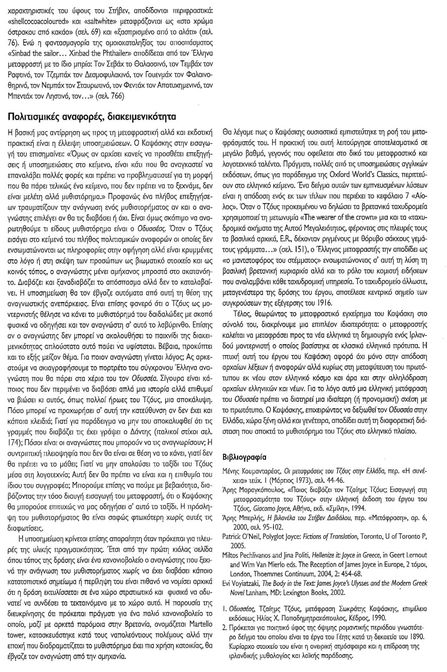